After traveling around Tierra del Fuego, observing the Fuegians and spending time with Jemmy Button‘s tribe, Charles Darwin arrived in Chiloé, the second largest island in Chile. In this region, Darwin explored the main island and the surrounding areas. In his journal, Darwin (1989) describes an interesting situation that took place when he arrived to San Pedro island, located in the southeast side of Chiloé.

‘A fox, of a kind said to be peculiar to the island, and very rare in it, and which is an undescribed species, was sitting on the rocks. He was so intently absorbed in watching their [Beagle’s officers] manoeuvres, that I was able, by quietly walking up behind, to knock him on the head with my geological hammer. This fox, more curious or more scientific, but less wise, than the generality of his brethren, is now mounted in the museum of the Zoological Society.’ 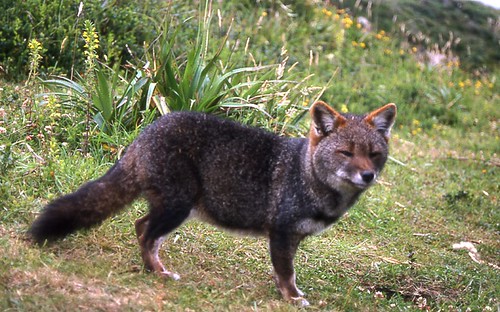 This little fox (Lycalopex fulvipes; syn. Pseudalopex fulvipes), known as Darwin’s fox and Zorro Chilote (Fox from Chiloé) ‘is perhaps one of the rarest, least known and world’s most threatened canid’ (Jimenez, 2007). Even though Darwin found this ‘more curious or more scientific’ fox in 1834, we have not gained much knowledge about this specie. Some estimate the population of the Darwin’s fox to be close to 500 (in Chiloé) (Yahnke et al., 1996). Recent studies show that the Darwin’s fox does not only live in Chiloé, but also in the coastal area close to Valdivia. The Nahuelbuta National Park (5415 ha.) is a coastal forest that remains the only mainland area in which the fox has been observed. Because of the distance between this Park and Chiloé, some speculate that this mainland population may have come from captive foxes.

It seems that there is some agreement regarding the extent to which this fox is in danger . However, it is not clear yet how to protect it.