The Easter Island is a very enigmatic place. If you do a brief research on the Island, you would realize that there are many different views about the history of the island. It has been well established, however, that the construction of the Moais stopped in the late 18th century. Why? I think we do not know.

I visited the Island after my first year in the Ph.D. At that time, I already had a journal rejection (or maybe even more than one). Although short, this academic experience led me to observe some of the things you can see in the Island with a surprisingly creative view (maybe too creatively).

After riding a bike for a couple of hours (see my post about biking around the Island), I made it to the quarry were the Moais were built. Although you can see many pictures before landing on the Island, it is still really interesting to walk around dozens of Moais lying on the ground in different positions. I walked around the external side of the volcano Rano Raraku and then I walked into the crater. When I was coming back from the crater, I ran into some rats and horses. I had to wait until the horses decided to move from the trail so I could keep going back to the entrance of the Park. 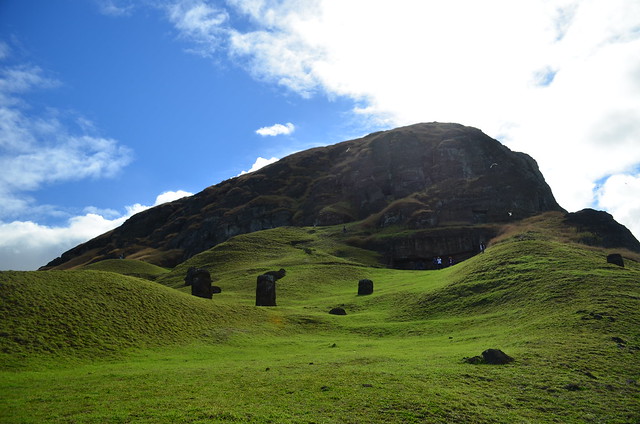 Before getting to the entrance, I ran into a special Moai. The Moai was (and it is probably still like that) lying horizontally. However, the interesting part was that the Moai was not a single piece of rock anymore. The statue was broken into several pieces.

Looking at the Moai I got what I would describe as an interesting piece of wisdom from the Easter Island. In a less elaborated way, I thought:

“The craftsmen that carved this statue spent a long time working on it. Unfortunately, this Moai got completely destroyed and useless after being broken off the wall of the volcano. Could they repair it? It does not seem they could. You, as a researcher, can also spend a long time ‘carving’ a research paper. However, and fortunately, when it is rejected from a journal, the paper is not broken for good. You actually can repair it and try again.”

So, yes, fortunately, as a researcher you do not end up with a broken Moai when a paper is rejected from a journal. And if the Rapa Nui (native Polynesian inhabitants of Easter Island) kept carving Moais, you definitely have to keep trying to get your paper published.

I think it works.

If you ever meet me and hear me saying “well, it is not a Moai”, then you will know what just happened.