Biking around the Easter Island (Rapa Nui) is a great idea. If you like to ride a bike, it is maybe the second best idea after the one you had when you decided to actually visit Easter Island.

In total, I biked around 120 km (75 mi) in 4 days. I was on the road (biking/walking/taking pictures) around 3-5 hours per day depending on the route I chose and the places I visited.

Some people bring their own bike, but you can easily rent one if you cannot take yours to the Island. I rented one that was not particularly good, so I am not going to recommend the store I visited. However, if you walk around Hanga Roa’s downtown, you will find a lot of places to rent bikes (mostly mountain bikes; this store had some nice looking bikes). It may cost around than 20-25 US dollars per day. You might be able to negotiate the rate if you rent it for a couple of days. I got almost a day for free because I rented it for 5 days.

I do not know exactly what are the things you should or have to bring, but I am going to list those that I brought to the Island and carried while biking.

You will not need to drink as much water as in a dryer weather. I used less than half a liter per hour.

I biked using what I describe as 4 routes. All of them starting from Hanga Roa. In all of them but route 3 I returned using the same main road. You can see a map of the routes in the next section.

This is mainly a coastal road. The main places you can visit following this route are Rano Raraku and Ahu Tongariki. The total length (round trip) is 43 km. Most of the route is flat, although expect a lot of short uphill and downhill parts (see the picture below). At the beginning (thus also at the end) of the route, you climb around 100 meters. 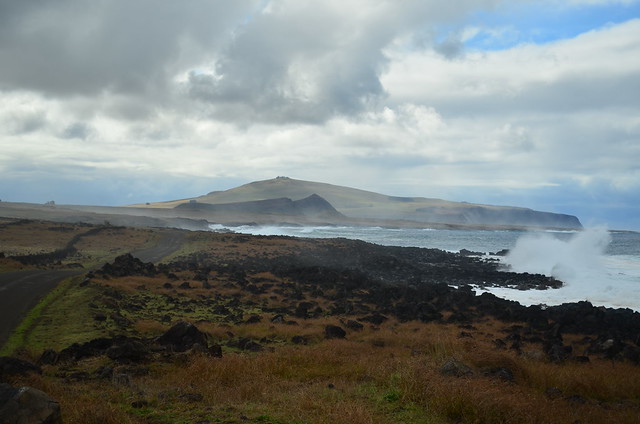 Looking east from the road. The tallest hill is the Poike volcano, the second tallest the Rano Raraku 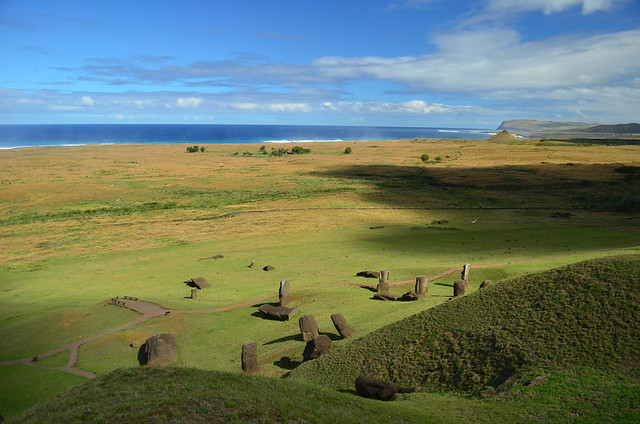 Looking west from Rano Raraku. The tallest hill at the back is the Rano Kau volcano

This is an inland road to Anakena, which is a beach that has an Ahu. It is a 38 km total-length road that has a lot of small uphill and downhill parts. On the way back, in the first 5 km you are going to find an uphill slope (very steep!). That part might take around 30 min if you are going up on the lightest gear.

This is a coastal and inland road to Ahu Akivi and Puna Pau. It is a 24 km total-length road. If you start from Hanga Roa to the North, the first half of the route goes right next to the ocean. That part is a dirt road in a very bad shape, but that makes it fun. Although you are a couple of meters from the shore, you are not biking right at sea level. You are going up slowly to 100 meters. I spent a lot of time at Ana Kakenga (“Two Windows” cave). I did not go into the cave but walking around the outside of the cave you can have a great view of the cliffs. There is also another cave on this route: Ana Te Pahu. Locals call this cave the “banana trees cave” because, yes, there are banana trees inside the cave.

Next to the Puna Pau there is a hill that is commonly known as the “Three Crosses Hill” because, yes, it has three crosses at the top. That is a really nice hike of less than 150 meters (at the top of the hill you are around 250 meters above the sea level). From the top of it, you have a great view of Hanga Roa and the west coast of the Island. And if you have a cell phone, you get the best signal there! 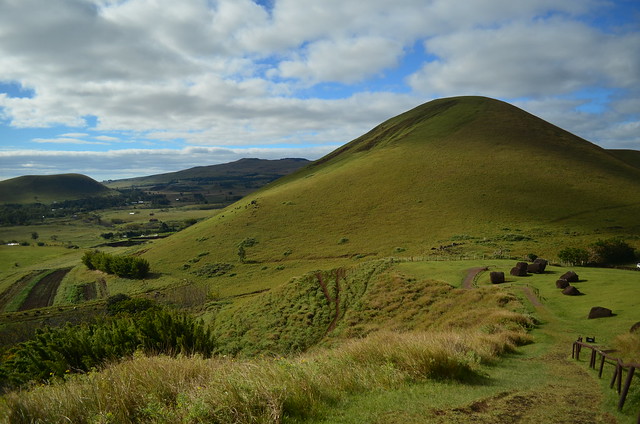 Looking northwest from Puna Pau. The hill on the right is the “Three Crosses” hill

This is an uphill road to Rano Kau and the Orongo Village. It is a 16 km total-length road. It may take around 40 min to get to the viewpoint of the Rano Kau’s crater. This route is great for the afternoon/evening. You can have really nice views of the ocean and Hanga Roa when the sun is going down.

Below you can see a map with the four routes and some of the main places on the Island. You may want to enlarge the map clicking on the upper right corner.

23 thoughts on “Biking around Easter Island”